Piero collaborated on a wide variety of projects with his brother Achille and their lighting designs were particularly successful for brands such as FLOS, Arredoluce, and Artemide still in production today. Their focus was on producing highly functional lights that were as practical as aesthetic. A number of their works are held by the MoMA in New York, and others can be found in significant design collections such as the Victoria and Albert Museum (London), the Kunstgewerbe Museum (Zurich), the Museo del Art (Prato), the Denver Art Museum, and the Vitra Design Museum. Their most famous piece is undoubtedly the Arco floor lamp.

2 – The Taccia lamp by Pier and Achille Castiglioni

The Taccia lamp is among many bestsellers Pier and his brother Achille for the Italian lamp manufacturer FLOS which are still in production today. A number of their works are held by the MoMA in New York, and others can be found in significant design collections such as the Victoria and Albert Museum (London), the Kunstgewerbe Museum (Zurich), the Museo del Art (Prato), the Denver Art Museum, and the Vitra Design Museum.

3 – The Artichoke lamp by Poul Henningsen

Poul Henningsen’s eloquent designs have developed a whole new lighting theme based on scientific analysis of light diffusion. Working from the idea that direct glare from an electric light source was harmful to well-being, Henningsen created lampshades from separate elements, formed and constructed to obscure the bulb, directing light downwards, and producing a lighter, more reflective effect. Like in his artichoke lamp (see below), Henningsen used various colored shades of glass with frosted surfaces to minimize the amount of harsh white light emitted and create a golden shade.

The PH lamp series’ first production was commissioned for the new Copenhagen Forum exhibition building. The PH design was based on Poul Henningsen’s  studies of light distribution.

Building on the success of his hanging lamp, Henningsen soon began producing table lamps like the PH 1941 below, floor lamps, chandeliers, and wall-mounted lamps, with metal and glass shades available in different colors.

5 – the Akari Lights and lanterns by Isamu Naguchi

Isamu Noguchi always remained deeply tuned to the material he was using while keeping a sensitive relationship with nature and society in every work. The Akari light sculptures were originally developed using traditional Japanese materials in 1951 and are still in production today.

6 – The Three-arm, sconce, and standing lamps by Serge Mouille

7 – the “Eclisse” by Vico Magistretti

In 1967, Vico Magistretti received the “Compasso d’Oro” award for the “Eclisse” (Eclipse) a lamp designed for the Italian manufacturer Artemide

THE BALL LIGHT & THE CIGAR LIGHTS are among George Nelson’s most famous lighting pieces. Here the influence of his friend and colleague Isamu Noguchi is most evident. The Japanese-American Noguchi created a series of paper lanterns which merged Western functionality with the beauty of Eastern sculptures. Nelson’s lighting pieces are less “sculptural” as the paper lantern concept is developed into more symmetrical and simpler shapes.

One of the most iconic lights designed by Kaare Klint is The Lantern Pendant Light.

MODEL 2970/50 ((and the smaller 30 light version Model 2097/50) is Gino Sarfatti’s reinterpretation of a traditional chandelier in Mid-Century Modern style. The chanderlier feature fifty (or thirty lights), arranged around a central steel column at the end of straight brass arms. The lights’ cords mimic the curves of a traditional chandelier. The chandelier was originally designed in 1958 and still in production by the Italian manufacturer FLOS. >> Please click here to see current offers and pricing. << 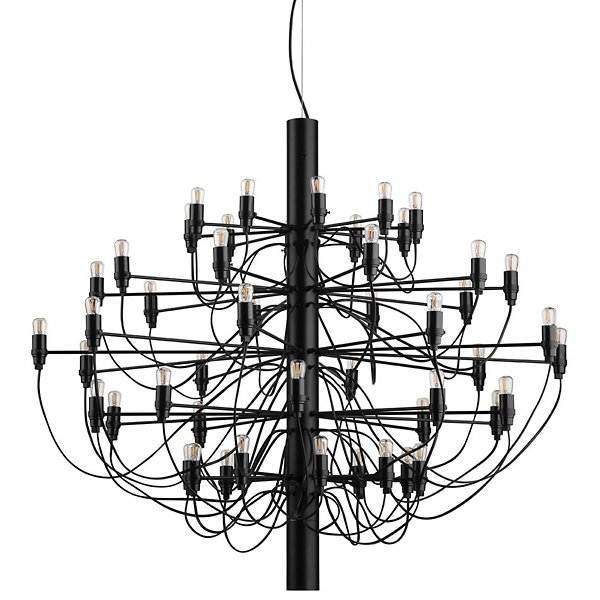 Click here to save up to 60% on top-brand display samples, open-box items and more @ Lumens.com. Plus, save an additional 5% with code: EXTRA5. While supplies last!