This post is a curated selection of what we believe are the most famous chairs by Mid-Century Modern designers. If you wish to dive deeper into each designer’s bio and style description, please click the links below to reach their individual profiles

1 – The ball chair by Eero Aarnio

The BALL CHAIR (1965) was One of Aario’s first major productions: a sphere supported by an aluminum stand, open on one side to allow a person to sit within. The internal part of the chair was covered in foam upholstery with a bright fabric finish. Aka the Globe chair, it was made with molded fiberglass – typically, in shiny white – but available in other colors like red, black and orange.

Designed by Jens Risom, the chairs from the “600 series” collection, were the very first to be produced by Knoll in 1943. The armless version of the chair is defined by sharp Scandinavian lines and blended with the rustic character of American arts and crafts. This chair became Mr. Risom’s signature piece in 1942 and was one of the first mass-produced modernist furniture pieces introduced in the United States before Europe.

3 –  The Shell chair by Hans Wegner

CH07 LOUNGE CHAIR aka THE SHELL CHAIR: In 1963, initially the public was not willing to embrace the three-legged chair, which was first exhibited that year in Copenhagen. But as time passed the SHELL CHAIR became one of the most iconic pieces of Wegner’s prolific chair design. The design was a shell chair which represented an edged piece of the woodwork with simple materials used.

4- The DAF chair by George Nelson

THE DAF CHAIR designed by George Nelson and manufactured in fiber glass, chrome-plated steel and aluminum had an innovative system of ball and socket – for the time – which allowed for an adjustable back. The shape is somewhat similar to the Hans Wegner’s Swivel chair produced 3 years before by Johannes Hansen (1955) but became a prototype of the modern office chair.

5 – The Swan Chair by Arne Jacobsen

Jacobsen designed the Swan Chair (and the Swan Sofa) as specialty pieces for lounge areas and lobby of the SAS Royal Hotel in Copenhagen in 1958. The curvy design of the chair and the sofa contains a synthetic mold, covered by a layer of foam upholstered in fabric or leather with an aluminum four-star swivel base in satin polished aluminum. This design is in continuous production by Fritz Hansen since it was introduced. It comes in a variety of upholstered colors and leather as well.

The sumptuous La Chaise of 1948 featured the sensuous curves of a reclining body or pouting lips.

7 – The side Chair by Harry Bertoia

The Side Chair is among the most recognized achievements of mid-century modern design. This ever-popular chair – which is still produced by Knoll – is made of polished steel wire, sometimes vinyl coated, and covered with cotton or with elastic Naugahyde upholstery. The original set was composed by the an “armchair” (the Diamond chair) as well as a side chair and a barstool (see picture above) made with the same mesh wire frames.

MODEL No. 670 LOUNGE CHAIR & OTTOMAN: likely the most iconic piece of Mid-Century Modern design. Based on a 1940 prototype, the chair was released in 1956 and has become a must-have piece for generations.

9 –The universal chair by Joe Colombo

Joe Colombo made furniture which was flexible and modular like THE UNIVERSAL CHAIR (1965) designed for the Italian manufacturer Kartell which could be easily modified and used as a stool. This stackable chair had detachable legs in two different heights and echoed Verner Panton’s Panton chair.

10 – The Egg Chair by Arne Jacobsen

The Egg Chair is Jacobsen’s signature piece and has become an icon in modern furniture design. This chair was commissioned for the SAS Royal Hotel in Copenhagen, Denmark in 1958. The wavelike shape of the Egg chair as well as the four-star aluminum base demonstrates Jacobsen’s ingenuity to create furniture with a simple yet elegant construction.

11 – The Classic chair by Hans Wegner

MODEL JH 501 ROUND CHAIR: aka the CLASSIC CHAIR is probably one the most iconic pieces of Hans Wegner. The chair was made of a sculpted wooden frame and woven cane seat and it was his re-interpretation of an classic Asian chair.

12 –The “Bucket chair” by Charles and Ray Eames

THE DINING ARMCHAIR ROD: DAR & THE DINING SIDE ROD: DSR aka BUCKET CHAIR by Charles and Ray Eames began as experiments with wire chairs, each design starting off with a sculpted, ergonomic seat.

THE POLYPROP stacking CHAIR was designed in 1963 and was immediately considered “the most important British mass production chair design since the war” by the Architects’ Journal.

14 – The Tulip table and chair by Eero Saarinen

The four-legged, three-legged, and two-legged chairs have always been common but Eero Saarinen was the one who introduced one-legged chairs known as the Tulip Chairs. With a truly stunning result, the Tulip collection became so iconic that they were often referred to as “the chairs by Eero Saarinen”. These chairs were part of the Eero’s Pedestal Collection (1957) which featured gracefully molded fiberglass chairs and upholstered stools having aluminum pedestal bases.

Model # 699 SUPERLEGGERA (or superlight) CHAIR: Ash and Indian cane, fabric or leather are the key materials used by Gio Ponti for this chair. Created in 1957, it was inspired by the traditional furniture of Chiavaria, the designer’s home village. The chair won him the Compasso Oro award in 1957.

The Womb Chair (1948) with its curvaceous appeal, along with the matching footstool, is one of most popular furniture pieces of Eero Saarinen. He created the “womb” using a glass fiber shell covered in foam rubber and fabric. In this design, Saarinen introduced a way to make a chair comfortable by the way its “shell” was shaped rather than the amount of cushioning it held. This chair is still being produced today much to the delight of modernism fans who value both style and furniture designed for relaxation.

17 – THE PANTON CHAIR by Verner Panton

THE PANTON CHAIR: In 1960, Verner Panton designed the revolutionary Panton chair. This was the beginning of a long collaboration with the manufacturer Vitra that still produces the seat today. Although the cantilevered chair (in the shape of an S) already existed in 1926, Verner Panton had the astonishing idea of manufacturing it in moulded plastic, once again proving its innovative character by presenting an original monobloc piece. He also wanted the chair to be easily stackable and comfortable. A Mid-Century Modern icon, the Panton chair has enjoyed – since its creation – continuous success while undergoing regular technical changes. It was only in 1999 that the chair was finally produced as Verner Panton wanted it, with a matt finish that makes it suitable for both indoor and outdoor use.  >> Please click here to see current offers and pricing. << 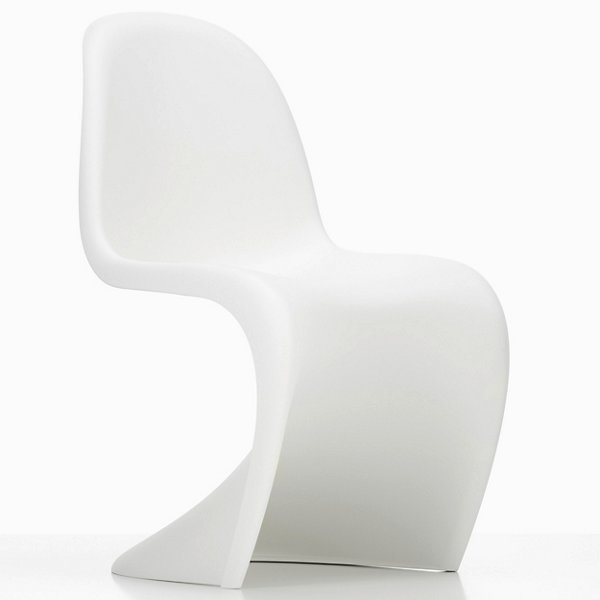 ORANGE SLICE CHAIR Designed in 1960, the Orange Slice is a timeless work that still seems as stylish and inspired as ever. Anyone who sees several Slice chairs together cannot fail to be amazed by the playfulness of their composition. This chair is composed of two identical shells made of pressed beech, embedded in a molded foam. The base is chrome-plated or powder-coated.

19 – the BUBBLE CHAIR by Eero Aarnio

BUBBLE CHAIR The most iconic piece by Eero Aarnio is the Bubble chair of 1968. It reminds of a sci-fi object that can even defy gravity, the Bubble chair was suspended from the ceiling by a heavy chain and it was almost entirely transparent. Not only was it radically different from any concept of chair conceived till then: pending from the ceiling rather than supported by the floor but also using a new – and somehow futuristic – material for the time: acrylic plastic. The use of these new plastic materials will become more and more a signature element of the new century modernism.

20 – The Conoid chairs by George Nakashima

The Conoid Tables and chairs designed by George Nakashima were named after his Conoid Studio, featured planks with freeform edges on cantilevered seats and legs. The tables were designed after receiving dining table sized planks from England.

Bonus: WASSILY CHAIR  No B3 by Marcel Breuer

WASSILY CHAIR  No B3: Marcel Breuer was greatly inspired by the form and shape of the bicycle hand bars. In 1925, he invented the tubular metal chair also known as the Wassily Chair. Later, this invention became the most famous piece associated with his name. >> Please click here to see current offers and pricing. <<